The DSC NEO security alarm system by DSC is designed for small structures to very large-scale commercial applications. The PowerSeries Neo with Alarm.com is the next generation of security alarm systems. CENTRAL SECURITY recommends the Neo security alarm panel when long range wireless devices are needed, PowerG wireless signal can travel up to a mile line of sight. 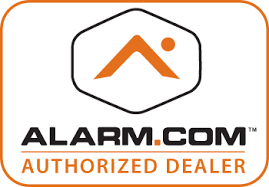 Alarm.com on the PowerSeries Neo offers a level of security beyond standard function and control. Alarm.com takes the DSC PowerSeries Neo and your business or home to full control over thru Application or Desktop. Add, Delete and Change user codes, set permissions, set hours of operation, integrate with Access Control and much more. The PowerSeries Neo by DSC on the Alarm.com 8080 is the best most advanced security alarm system available.

The next generation alarm system will remain on a hardwire professional security panel and will integrate with Alexia, Lift Master, Nest and much more. Alarm.com is leading the security alarm industry in alarm system service integration.

PowerSeries Neo captures the flexibility of a modular, hardwired system with the simplicity of a wide range of wireless devices and peripherals, resulting in a ground-breakingly comprehensive and versatile hybrid system suited for small business structures through to large-scale commercial applications.

DSC makes a powerful statement with PowerSeries Neo, a new feature-rich platform which leads the industry in redefining scalable commercial security. The fusion of various state-of-the-art technologies result in a uniquely flexible and modular platform, enabling PowerSeries Neo to cater to a wide spectrum of intrusion industry needs, ranging from residential through to scalable commercial. PowerSeries Neo brings the best of technologies together, adding operational efficiencies while enhancing the reliability of high quality and
secure communications.

Four control panels ranging in capacity from 16 to 128 zones provide PowerSeries Neo with a reliable heartbeat to cater to a range of security system installations with even the most demanding partitioning requirements. These panels fully integrate with the extensive selection of PowerG- enabled devices which have been created with simplicity of installation and userfriendliness in mind. The bundled power of PowerSeries Neo is harnessed by distinctive software solutions, reminding you every step of the way that this isn’t your typical security system.

PowerSeries Neo is designed to be compatible with leading-edge interactive solutions fully supported by Alarm.com, allowing for a variety of smart home control monitoring and business features. Anticipating future needs by infinite opportunities to maximize the system, the PowerSeries Neo becomes an undisputed first-class security alarm monitoring system for your home or business.

The previous generation, from the 90’s till 2010, alarm systems and service typically were programmed to recorded alarms and troubles to central station. The problem with this is you had to have an issue, an alarm or a trouble, to know if the alarm system was working.

The next generation alarm system will remain on a hardwire professional security panel and will integrate with Alexia, LiftMaster, Nest and much more. Alarm.com is leading the security alarm industry in alarm system service integration.

The PowerSeries Neo captures the flexibility of a modular, hardwired system with the simplicity of a wide range of wireless devices and peripherals, resulting in a ground-breakingly comprehensive and versatile hybrid alarm system suited for small business structures through to large-scale commercial applications.

Multichannel, Frequency Hopping Spread Spectrum technology enables the system to hop between wireless frequency channels to ensure the seamless transmission of secure communications between the devices and the control panel.
Adaptive Transmission Power translates into up to eight years of battery life for the system’s devices and peripherals, reducing battery- replacement incurred costs.

TDMA synchronized communication technology prevents messages from colliding by splitting channels into various time slots, allowing for an increased amount of data transmission and ensuring that devices are able to consistently communicate when needed.

The Power of PowerG

The power behind PowerSeries Neo lies in various innovative technologies, including the revolutionary PowerG, which, bundled together, provide a robust and feature-rich platform. Designed to reduce operational costs for dealers and provide ultimate reliability for end users.

There are PowerSeries Neo version updates available. In the event that there is any module version 1.0 it is recommended to either update the main panel to version 1.12 or replace the modules with version 1.10. Firmware updates are available using DLS 5 software.

As the most comprehensive hybrid system available in the market today, PowerSeries Neo offers flexible scalability and a number of expansion opportunities. A variety of control panels, a wide range of compatible PowerG- enabled wireless devices and a complete line of expansion modules protecting the investment and ensure growth in the future.